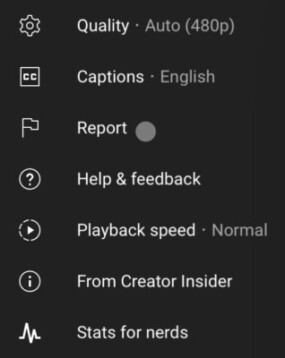 YouTube does not automatically remove videos or penalize channels for receiving a certain number of flags. All content goes through the same review process.

YouTube Creator Liaison, Matt Koval, spoke with the company’s trust and safety team to get the facts on what happens to videos that are repeatedly flagged.

When people watch videos on YouTube, one of the things they can do is flag it by clicking on the three-dot menu icon and clicking “Report.” Users are then asked to indicate the reason they’re reporting the video by selecting from one of the choices in the example below. It’s all anonymous and any video that gets flagged gets looked at for violations.

Flags don’t impact the outcome of a video’s policy assessment. If a video gets one flag, or one thousand flags, it still goes through the same review process.

It’s possible that a video with thousands of flags will be scrutinized more than a video with fewer flags, but it will nevertheless get assessed by YouTube’s content review team.

There’s no system in place on YouTube that will cause a video to get taken down for being reported X-number of times.

If a video is found to be in violation of YouTube’s guidelines, then action is taken as swiftly as possible.

Possible actions YouTube can take include age-gating the video, removing it entirely, or even terminating the whole channel that published the video.

The fact that all reported videos get assessed by YouTube’s review team is a good thing for creators because it prevents videos from getting taken down for the wrong reason.

Many times viewers will flag a video not because it breaks a policy, but because they simply don’t like the video.

Sometimes a video accumulates a lot of flags as a result of what the YouTube team calls “brigading.”

Brigading means a large group of people have ganged up on a video in an attempt to take it down even though it doesn’t violate a policy.

Can brigading cause a video to get taken down? YouTube says, emphatically, no.

All videos are evaluated under the same policies no matter how many flags they have. That’s done to make sure there is no malicious or unfair treatment of someone’s content.

The final call on whether to take action on a video is left to YouTube, who has teams in multiple languages evaluating reported videos 24 hours a day, 365 days a year, in time zones around the world.

If the team encounters borderline content where it’s tough to make a call, the video will move up the chain of command until a final decision is made.

YouTube creators can rest easy knowing if an angry mob reports a video because they don’t like the content, it will not get removed unless it’s genuinely in violation of company guidelines.