It’s 2021 and we can successfully launch a rocket into space, but we can’t stop the spread of misinformation on the internet.

Even in marketing, there are things we’ve heard (and maybe even repeated) that qualify as misinformation — nuggets we took as gold to guide our SEO strategies at the time because everyone thought the same thing.

Maybe it was once true.

Maybe it was never true.

Maybe it is true… but not in the way you think.

And despite the fact that SEO has become a more data-driven field than ever before, lots of silly beliefs still persist.

Let’s debunk a few of them.

Here’s a quick roundup of the five biggest misconceptions about SEO I’ve seen spouted in the last year, and why they just aren’t true.

Whether or not social signals impact SEO has been a hot topic for at least the last ten years.

It makes sense that the more followers you have, and the more traffic you divert to your site from social media… and therefore the better your search rankings.

John Mueller is on the record as far back as 2015 saying that no, social signals don’t directly impact your rank.

This is because followers can be bought. Likes and comments are vanity metrics. Content that’s easy to share will be shared.

When does social media impact your brand’s visibility in the search engines?

From Steve Ballmer’s prediction that the iPhone would flop to a New York Times op-ed claiming laptops would never gain any popularity, there have been a lot of bad predictions made over the years.

One of those has been that SEO was a dying fad and websites shouldn’t pay any heed.

The idea that SEO is dead has been around since the early 2010s, mostly seized upon by internet agitators trying to establish a new take on much of the insanity within the industry at the time.

And if you remember the Wild West that SEO was back then, you might understand why some people believed it couldn’t possibly last.

They were half right.

SEO is not dead, but…

But SEO will be dead when Google is dead, and the 6 billion searches happening every day say it’s not.

6.5 billion searches per day in March 2021. In March 2020, the number of daily Google searches was about half that.

In 2011, Google began rolling out the Panda update to clean up all of the low-quality, thin content that had choked up the SERPs.

It signaled the end of the SEO content gold rush and the beginning of a new era — one dominated by expert content put out by authoritative authors and trustworthy sources.

However, at some point, misinformation about what quality means to Google began to circulate. One of those SEO myths was that we must never, ever post duplicate content on our sites or we’d get penalized.

According to Google’s John Mueller, it’s normal for sites to have a certain level of duplicate content. When multiple pages containing the (mostly) same information return from a site, Google simply doesn’t show them.

Users will see this instead:

Ever seen this? It happens when pages have duplicate content.

That can be a bad thing in terms of your content not landing in front of eyeballs, but only if those omitted results are meant to be unique.

If you need a unique result, you must have unique content. Otherwise, don’t sweat it if those landing pages all look similar or you’ve got a few blog posts covering the same topic.

Since Bill Gates coined the phrase in 1996, we’ve latched onto the idea that content is king because it’s what drives visibility online.

You must create the best possible content that you can. But saying that content is king is about as accurate as a business saying that its store signage is the most important thing in its entire strategy.

Your audience is king, and your content needs to serve them.

What’s the point of optimizing for one keyword when you’ll rank organically for hundreds?

I get that question a lot.

Sure, the emphasis in SEO has shifted from keyword stuffing and weird, SEO-laden headlines. We don’t shove words into sentences or sentences into paragraphs just to get our keyword density anymore.

But if you think keyword research doesn’t matter anymore, you’re doing yourself a disservice. 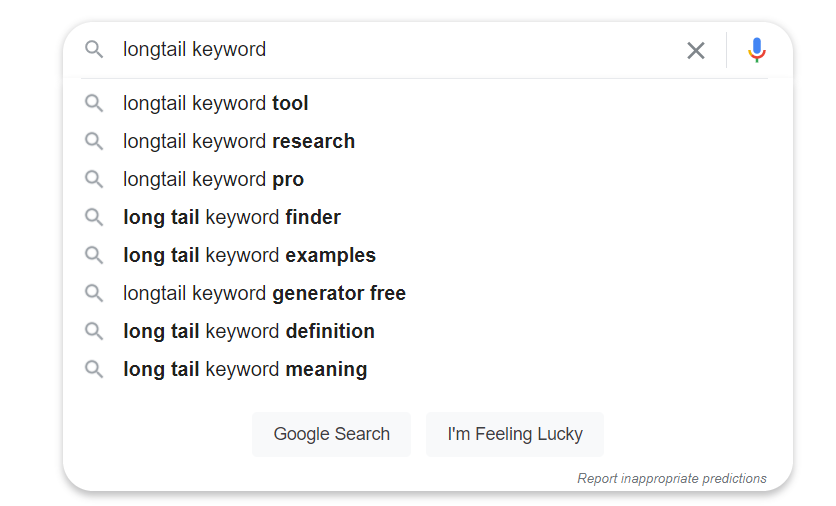 Pro-tip: Most of Google’s predictive suggestions are long-tail keywords.

From superstitions about keyword density to ideas about the true role of content, there are a lot of SEO misconceptions out there.

Some of them used to be true but aren’t any longer, given the way the field has evolved. A few of them were never true – they just sounded good, so we believed them.

Succeeding at SEO isn’t about buying into popular conspiracy theories or myths you’ve heard through the grapevine. It’s not about jumping on fad advice.

It’s about building a great brand on a foundation of awesome content and thoughtful keywords.

Now that you’re empowered by the truth, go forth and create the value users are looking for.

All screenshots taken by author, March 2021